“It’s all about you,” he said to the little one beside him. “All I need is to take care of you…and to make lots of money for the both of us.”​

Brodie Rogan’s baby-mama only wanted one thing from Brodie: his money. Since she wanted nothing to do with his son, billionaire player Brodie must prepare to face a new role in life, single fatherhood, with a strong emphasis on single. Feeling disgruntled and abandoned by the mother of his child, the former playboy has no plans to get involved with any new bunnies anytime soon, if ever. After all, what’s the point of being rich if he has to worry all the time about being taking advantage of?

When his tiny Thomas arrives, it is that new life rather than dead presidents that now dictates the terms of Brodie’s life, at least until he meets Cara Rodriguez, a walking, talking breath of fresh air, with a scorching hot body. Brodie only lets his guard down enough for a one-night stand, but little does he know that Cara will turn out to be good for him and his precious son. As hard as he tries, he cannot fight the heat and passion he feels when he’s around her.

Just when things appear to be perfect, will Brodie’s player ways ruin the best thing he and his little Thomas could have ever hoped for, or will Cara overlook his imperfections and love the billionaire and his baby? 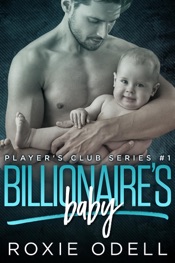